Previous work has identified a correlation between arc-continent collisions in the tropics and episodes of cooling (Macdonald et al. 2019). We are currently building upon the suture database of Macdonald et al. (2019) to incorporate 1000-500 Ma sutures, which are predominantly associated with the amalgamation of Gondwana. We are also distinguishing between different types of sutures, including continent-continent collisions and accretionary orogens, which may have different geochemical and climate effects. With this work we are also constructing a new Neoproterozoic paleogeographic reconstruction. Together we hope to better understand the relationships between tectonics, paleogeography, and climate over the past billion years.

The role of tectonic processes in Indonesia and New Guinea

To test the hypothesis that global climate is primarily controlled by tropical arc-continent collisions, one important step is to closely examine the current climate and determine if we can identify the main reasons it is in its current configuration. Since the Middle Miocene (approximately 14 million years ago), a significant cooling trend has been observed (Zachos et al., 2001). The hypothesis that tropical arc-continent collisions are responsible for CO2 drawdown through increased weatherability suggests that this cooling trend may be trigged by the initiation or growth of such an arc-continent collision. Indeed, a global accounting of suture length compared with latitude through time suggests that the modern Indonesia-New Guinea-Philippine system represents among the longest such system in the tropics throughout Earth’s history (Macdonald et al., 2019). Our goal is therefore to compare when exhumation of easily weathered mafic and ultramafic rocks in this system occurred versus that of the cooling trends from the last 14 million years.

We are currently focused on deciphering the history of the Irian Jaya ophiolite on New Guinea. Samples from this ophiolite and the surrounding area are available to us through our collaborator Mark Cloos at UT Austin, who participated in a remote field campaign to explore the geology of New Guinea using helicopters to navigate the dense jungle on the island. Using apatite and zircon separated from these samples, we are currently gathering (U-Th)/He data. These data, combined with fission track dating that already exists for these samples, and U-Pb dating of the zircons performed at UC Santa Barbara, gives us the time that each sample pass through a number of closure temperatures (see the quick description of thermochronology on the Background page page). Using the modeling program HeFTy (Ketcham, 2005), we will combine these data to determine the most likely time-temperature path of the ophiolite. To further understand the extent of the Irian Jaya ophiolite’s exhumation over time, these time-temperature paths will be used as input for the program Pecube (Braun et al., 2012), which is used to understand how faulting and exhumation have worked together to change the surface erosion of the ophiolite through time.

Once the amount of ophiolitic material that has been eroded is understood, the final piece of the puzzle will be determining whether and how much CO2 drawdown since the Middle Miocene can be attributed to an ocean alkalinity increase resulting from this erosion. To understand this connection, we are analyzing sediment cores collected off the northern edge of New Guinea, which is where eroded ophiolitic sediment is deposited. By comparing the mineralogy and geochemistry of these cores to that of the parent material that makes up the island of New Guinea (including the ophiolites), we will assess how much weathering has occurred. By extension, we can then determine the amount of alkalinity contributed to the oceans by this process and the resulting reduction in atmospheric CO2 that can be attributed to the exhumation of these ophiolites since their formation around 14 million years ago.

The temporal correlation between arc-continent collisions in the tropics and advances in ice extent is compelling but to get at a causality we need to estimate the weathering flux associated with these ancient orogenies. Measuring modern weathering is done via aqueous chemistry of rivers, unfortunately that river water is not preserved. Marine precipitates are one such way to try to infer riverine  fluxes, however they dillute local weathering throughout the global ocean and uncertainties around hydrothermal fluxes can obscure weathering fluxes. To attempt to measure ancient weather rates, we are targeting silicic sediments derived from obducted ophiolites and measuring their depletion of Ca and Mg.

We use immobile elements in sediments to constrain the starting composition of the protolith and measure the concentration of mobile elements in those same sediments. We have sediments the taconic orogeny and from New Guinea which hopefully capture similar processes happening today and during the Ordovician. We are also using large sedimentary data-sets from across the United States spanning many protoliths and climates.

The analysis of our modern, New Guinea, sediments will be crucial for understanding how and where chemical depletion of mafic and ultramafic minerals occurs. Of course New Guinea weathering rate is more accurately measured through riverine studies, however the silicic sediments will inform our ongoing work in the Taconic orogeny and future fieldwork (when the pandemic allows) in Newfoundland sampling post-collisional sediments. 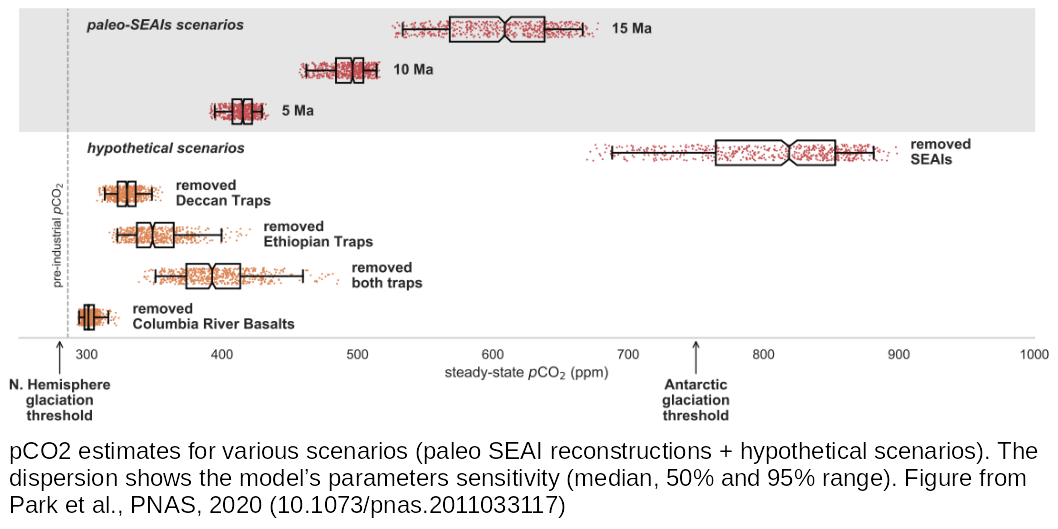 GEOCLIM is a geological carbon cycle model simulating the silicate weathering feedback and explicitely representing the continental distributions of lithology, erosion and climate fields, and their link to CO2 through a coupling with a climate model (GCM). Such model is a useful tool to estimate the weathering sensitivity.

We used GEOCLIM in the context of the recent emergence of the South-East Asian Islands (most of Indonesia, New Guinea and the Philippines, abbreviated SEAI). The SEAI is a key place of weathering precisely because of its lithology, erosion rate (both linked to its tectonics context) and tropical climate. We estimated how much CO2 drawdown in the recent past (last 15 million years) can be attributed to the ermergence of SEAI, according to several scenarios of land emergence. The complete study was published in Park et al., PNAS, 2020.

The Miocene epoch (~23-5.3 Ma) was a time of global climate change, with a peak in temperature in the mid-Miocene preceding a global cooling trend that continued until the onset of modern anthropogenic carbon emissions (Zachos et al., 2008). This temperature peak, which coincided with a minima in Antarctic ice sheet extent (Foster et al., 2012), is known as the Miocene Climatic Optimum (MCO), and represents an excellent opportunity to study a major global warming event in the recent geological record. However, the timing of the onset of warming in the Miocene remains poorly constrained, and the drivers of the MCO and subsequent cooling trend remain largely enigmatic. Volcanogenic CO2 flux associated with the eruption of the Columbia River Basalts (CRB) has been proposed as a potential driver of MCO warming (Hodell and Woodruff, 1994; Kasbohm and Schoene, 2018), with the resultant chemical weathering of the CRB suggested to be a driver of Miocene cooling (Hodell and Woodruff, 1994). Another proposed driver of the cooling trend, known as the ‘Monterey Hypothesis’ is the extensive burial of organic carbon in coastal Pacific basinal strata, including organic-rich sediments of the Monterey Formation (Vinvent and Berger, 1985). However, causes of this putative enhanced carbon burial remain unknown. 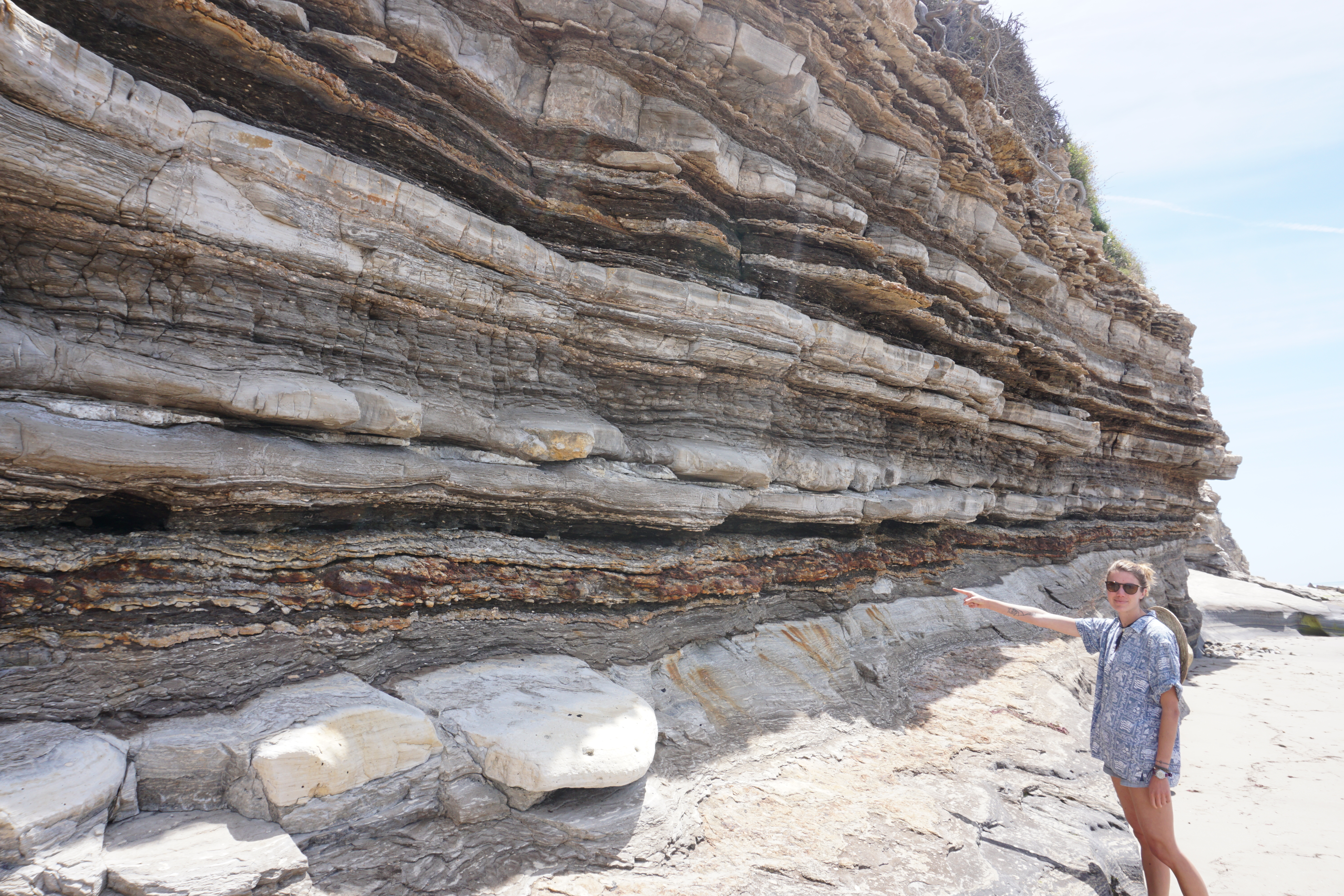 Interbedded carbonates, phosphorites, and bentonites of the Monterey Formation, exposed along the beach cliffs near Tajiguas Beach, Santa Barbara County.

In order to test the above hypotheses, it is necessary to know the timing of each putative driving mechanism relative to the onset of the resultant climatic change. Using carbonate chemostratigraphy, biostratigraphy, and U-Pb geochronology, we are developing a new high-resolution age model through the Monterey Formation. This work will result in new direct constraints on the timing, rate, and spatial distribution of organic burial in the Monterey Formation, refine the model for the onset and duration of the MCO and subsequent cooling within an absolute radiometric framework, and allow for the direct comparison of CRB emplacement ages (Kasbohm and Schoene, 2018) with the onset of Miocene climate change.

Well-preserved outcrops of the Monterey Formation are found throughout central California’s coastal regions (Hornafius, 1994), and provide an ideal natural laboratory to investigate the drivers of Miocene climate change. Shales, silts, and calcareous laminated deposits of the Monterey Formation contain abundant foraminiferal tests that are excellent candidates for both chemostratigraphy and biostratigraphy. These strata are intercalated with bentonite ashes containing zircon crystals that can be precisely dated with U-Pb geochronology. With multiple exposures of the Monterey Formation located just minutes from the UCSB campus, this work is a unique opportunity to use our local geology to address globally-relevant topics in Earth history and paleoclimate.

Hodell, D. A., and Woodruff, F. J. P., Variations in the strontium isotopic ratio of seawater during the Miocene: Stratigraphic and geochemical implications, Paleoceanography and Paleoclimatology 9, no. 3, 405-426 (1994)

Kasbohm, J., and Schoene, B., Rapid eruption of the Columbia River flood basalt and correlation with the mid-Miocene climate optimum. Science Advances, 4, no. 9 (2018)

Ketcham, R. A. Forward and Inverse Modeling of Low-Temperature Thermochronometry Data. Reviews in Mineralogy and Geochemistry 58, 275–314 (2005).