Continental rocks weathering is a complex interaction between rainwater percolating in subsurface and subsurface rock minerals that are unstable with respect to Earth surface condition, and especially because of the acidity of rainwater due to CO2 it carries.

Weathering of silicate rocks, associated with oceanic carbonate precipitation transfer CO2 from the atmosphere to the sediments, as illustrated by the following reaction:

The first reaction occurrs on land, the second in the oceans. The net budget is thus:

Generalizing to all the types of silicate, 1 mole of Ca or Mg of weathered silicate is associated with 1 mole of precipitated carbonate (see global geochemical cycle for the fates of all silicate main cations). Hence, each mole of weathered Ca or Mg removes 1 mole of CO2 from the atmosphere. The weathering of other rocks (carbonates and evaporites) has no effect on the net CO2 budget.

Because continental weathering of silicates is a chemical reaction between infiltrated water and subsurface rock, its intensity is closely linked to the subsurface water flow (see paragraph a double reactive transport for more details), itself determined by the net precipitation rate, or precipitation minus evaporation (P-E). P-E is supposed to increase under global warming (see paragraph why would runoff increase in a warmer climate), hence, the silicate weathering flux (Fsil wth) increases (or decreases) if global climate warms (cools). This generates a negative feedback that is called the silicate weathering feedback. Indeed, any climatic perturbation should trigger a change in silicate weathering rate, and then in CO2 uptake flux, that counteracts the initial perturbation.

The time needed for that feedback to act is determined by the residence time of carbon in the "surface reservoirs" (atmosphere + biosphere +ocean), which is ~100,000 years.

Let us consider a mathematical formulation for the silicate weathering flux, for instance: Fsil wth = k (pCO2). At steady-state (neglecting the other carbon sources and sinks), CO2 degassing must be blanched by CO2 uptake through silicate weathering, hence:

If this is not the case, pCO2 will rise (or fall) until equilibrium is reached

Why would runoff increase in a warmer climate

That global temperature should increase with higher concentration of greenhouse gases is logical, but that precipitation increases as well may seem less straightforward. The key point is that a warmer air can contain more water vapor (the saturation vapor pressure of air increases with temperature, at constant pressure, according to the Clausius-Clapeyron relation). However, a system containing more water does not necessarily have higher input/output water flux. This has to do with the atmospheric circulation. Precipitations are mainly (though not entirely) driven by the uplift of air masses, as temperature decreases when air rises, water precipitates. Hence, the precipitation rate (P in kg/m/s) may be approximated by:

With w the vertical velocity (m/s), ρ the air density (kg/m) and q the water vapor content (specific humidity, in kg/kg), at surface and at the top of the updraft. In a warmer climate, qsurf is higher, so, assuming the atmosphere circulation experiences little changes, the precipitation rate increases. If we further assume that the ratio precipitation/re-evaporation does not change, then net precipitation (or total runoff) should increase. 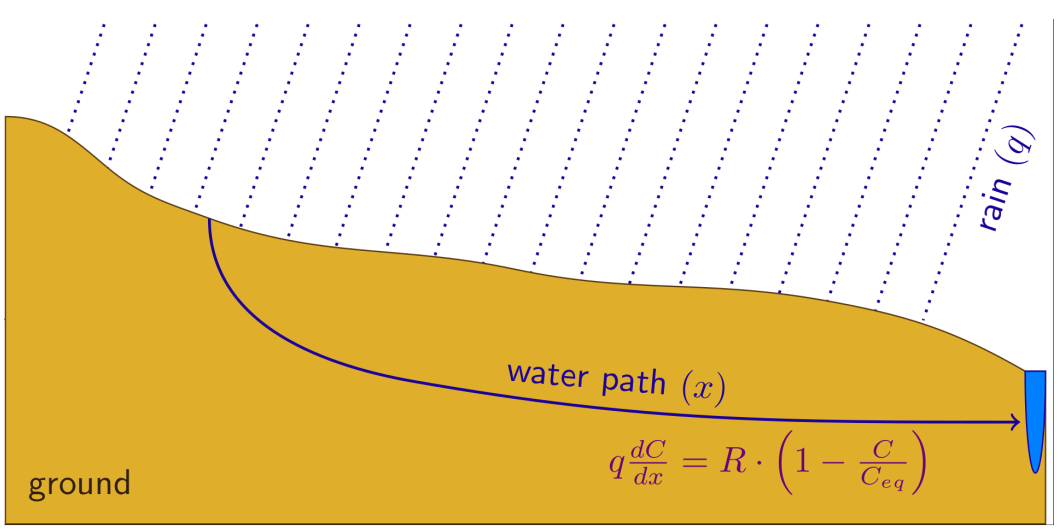 The weathering of continental rocks is caused by the circulation of water in Earth subsurface that chemically reacts with minerals, and carries the dissolved solutes to resurgences, rivers and eventually, ocean. It can then be described by reactive-transport (see opposite figure). As water flows through the subsurface, it accumulates dissolved elements, up to their saturation concentration (where the dissolution reaction is at thermodynamic equilibrium). Its evolution is described by an advection-reaction equation (at steady-state on the opposite figure). The flow rate q corresponds to the net precipitation (or total runoff), provided that superficial runoff can be neglected. The reaction rate R and the saturation concentration Ceq critically depends on the mineral assembly and all the possible chemical reactions. The schematics is then an oversimplification assuming that water is flowing in a homogeneous media whose dissolution can be boiled down to 1 reaction equation. However, it shows that the system falls between two modes: if the residence time of water in the subsurface is long enough, the solutes reach their saturation concentration Ceq, and specific weathering flux (in mol of elements/m/s) is qCeq. This is the transport-limited regime. If, on the other hand, the reaction rate is too slow with respect to the time spent by the water, C remains far from Ceq, and the specific weathering flux becomes RL (with L the length of the flow path). This is the kinetics-limited regime. The actual weathering rate is the average of all the flow paths, but generally the transport-limited regime is dominant, which is why the weathering rate is approximately proportional to runoff. One may note that because the reaction rates increase with temperature (Arrhenius law), the weathering rate is still enhanced by climate in the kinetics-limited regime. 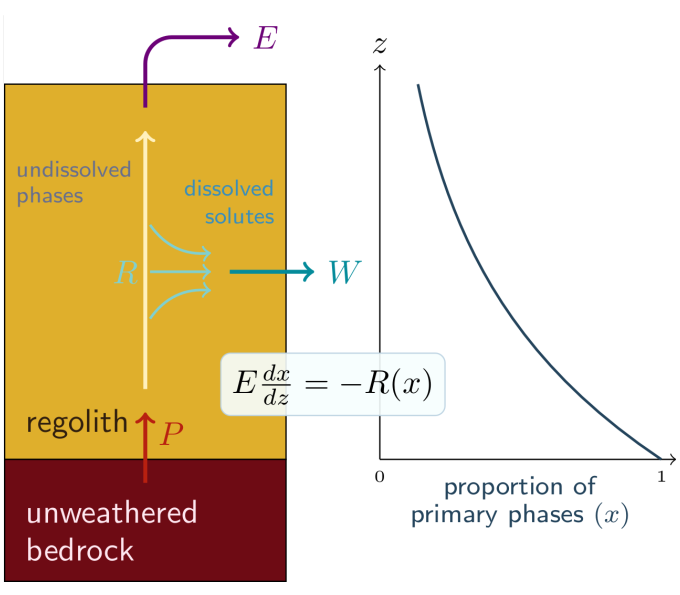 The system is actually much more complex because the subsurface is not homogeneous, water can encounter successively different types of minerals, meaning different reactions, R and Ceq. The average of all water paths becomes then difficult to estimate. Moreover, even in a single-lithology landscape, the abundance of minerals susceptible to weathering decreases towards the surface because they are already weathered (the previous formalism assumes that the amount of minerals is not limiting). This brings us to the second point of this paragraph. Most landscapes are dynamic. Erosion removes matter at the surface. This means the subsurface rock “moves” towards the surface at the speed of erosion rate (E). Deep rocks are inert because they are too far from the surface to react with infiltrated water. When they get closer to the surface, they enter a zone where they react with water and start being weathered. We call that zone the regolith (see opposite figure). Hence, mineral are also subject to reactive-transport, and the same formalism than before can be applied (steady-state advection-reaction equation is written in opposite figure) including the existence of kinetics-limited and transport-limited regimes (they are rather called weathering-limited and supply-limited, respectively), except that the “transport” is purely vertical, at least in landscape not subject to sediment deposition. The specific weathering rate is the integral of R(x(z)), which is equal to E(1-xsurf).

Continental weathering can then be seen as a double reactive-transport system, of both water and minerals. The weathering module of the GEOCLIM carbon cycle model only considers this second approach. Regolith profiles are explicitly represented, whereas the water reactive-transport was parameterized assuming the local reaction rate constant at depth z is proportional to the runoff, up to a saturation point.

The process of arc-continent collision 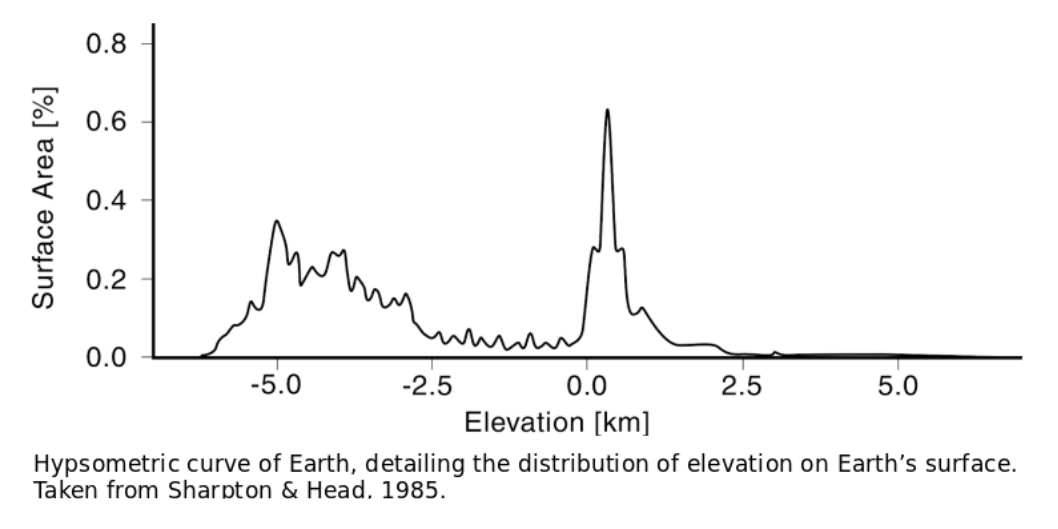 Unlike the rest of the solar system, Earth’s surface has a bimodal distribution of elevation. Much of the continents lie around sea level, while the ocean floor is on average 4km beneath the surface. A remarkably small proportion of Earth’s surface houses elevations in between that of the average continent and average ocean, as shown by figure hypsometry.

This unique distribution is driven by plate tectonics and the contrasting lithologies that plate tectonics creates. Continental crust is formed at low temperatures and is, on average, andesitic, in composition. It is made of minerals like quartz, feldspar, and amphibole as well as some clays and micas. These minerals are low density (as far as rocks go) and weather slowly under normal conditions.

Oceanic crust is formed at higher temperatures and is basaltic in composition. Basaltic rocks can contain plagioclase feldspar, pyroxene, amphibole, and/or olivine. Basaltic minerals are unstable at Earth’s surface, they weather rapidly. They are also more dense, causing the oceanic crust to sink further into the underlying mantle.

On rare occasions, however, the oceanic crust can be obducted onto the surface. When this happens, the previously underwater basaltic rocks are exposed to the elements and can be weathered more readily than the surrounding rocks (see: weatherability). Obductions are usually brought about through arc-continent collisions. That is, the collision of an island arc with a continent. The process is outlined visually in the figure below. 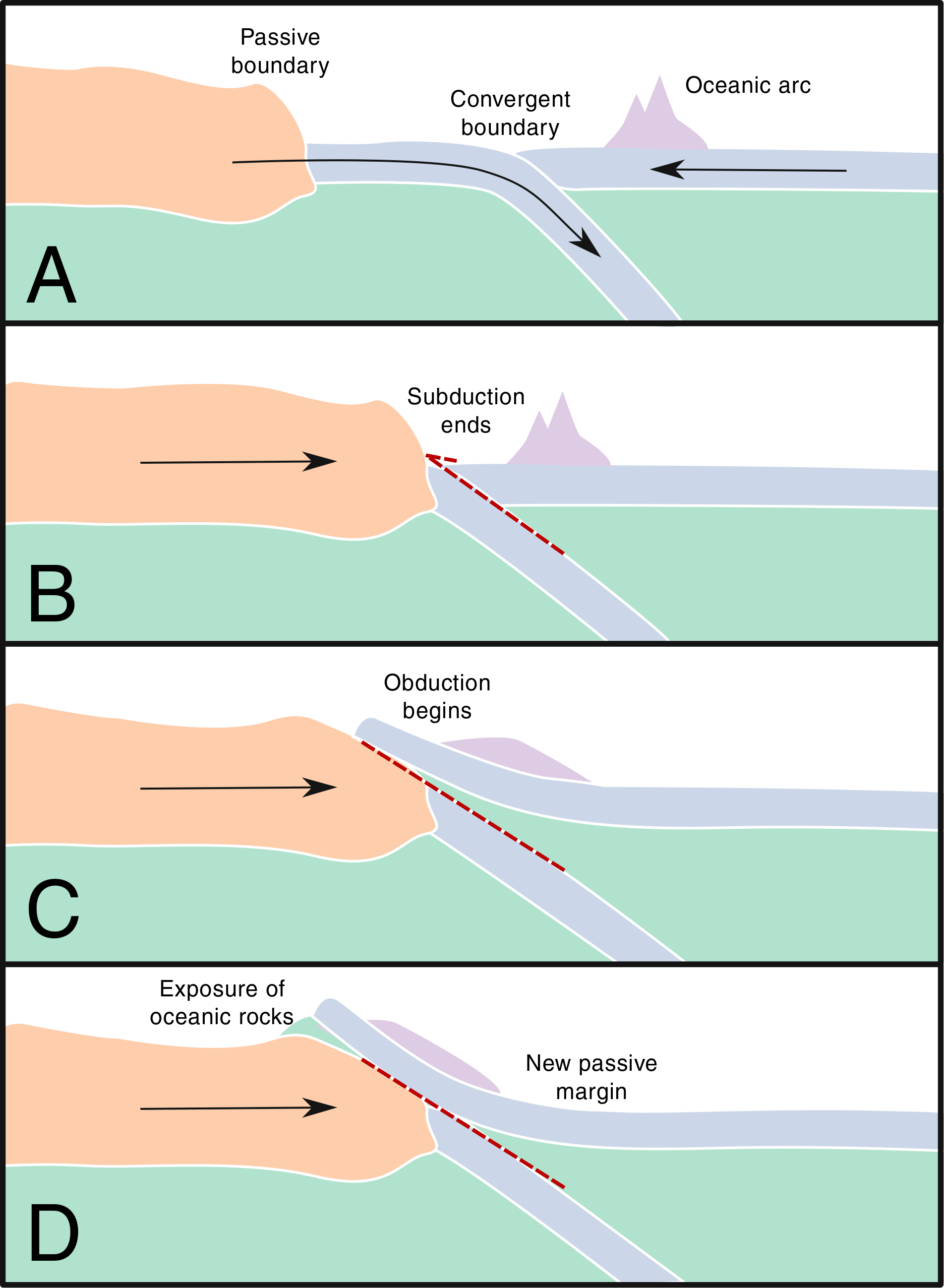 Figure: obduction. Simplified schematic of an arc-continent collision. A: Existing island arc. B: Gradual consumption of the subducting plate causes collision with continental crust. C: Island arc begins to be obducted over the continent. D: A section of island arc, oceanic crust, and upper mantle is exposed on the surface as an ophiolite.

At first, in panel A, an island arc is formed through the subduction of an oceanic plate beneath another oceanic plate. This process creates a thickened oceanic crust with some active andesitic volcanoes.

In Panel C, the convergence is accommodated by the obduction of the oceanic plate onto the continental plate. This is made possible, in part, by the island arc that helps drag the denser material onto the continent.

In the instance of Panel D, the convergence ceases once one of the plates adheres to the other and the two move in tandem. Alternatively, the previous subduction zone could be reactivated after the obduction of the island arc. In either case, oceanic material is exposed on land, often with the inclusion of some upper mantle. The exposure of oceanic crust on top of the continental crust are called ophiolites and their location records the sutures of oceanic and continental terrains through Earth history. 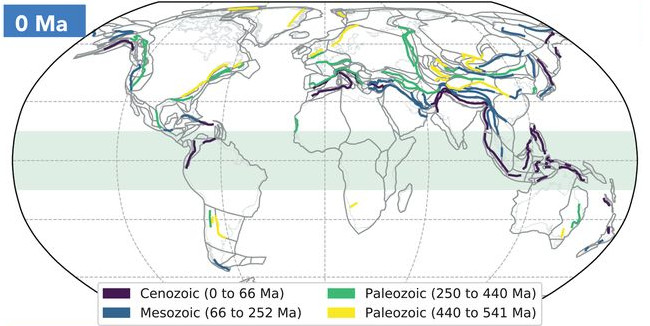 Figure: A compilation of sutures. Current distribution of ancient arc-continent collisions on Earth, coloured by age of obduction.

On million-year time scales, the amount of CO2 in Earth’s atmosphere and oceans is controlled by carbon fluxes into and out of the mantle. CO2 leaves the mantle and enters Earth’s surface reservoir via volcanism and metamorphic degassing. It then interacts with silicate rocks via chemical weathering reactions, and precipitates as carbonate rocks in the oceans. Some of this CO2 will also be used by plants and animals to form organic compounds. Eventually, these carbonate rocks and organic compounds will be returned to the mantle at subduction zones, completing Earth’s geologic carbon cycle.

However, the input and output fluxes of CO2 are not independent of each other. Earth’s surface environment is a complex system of interconnected processes, such that changes in the input flux of CO2 will cause a cascade of feedbacks that ultimately cause the output flux of CO2 to also change. The most important of these feedbacks is the silicate weathering feedback, which always acts to restore balance between the fluxes of CO2 into and out of Earth’s atmosphere and oceans.

Radioactive elements (such as uranium and potassium-40) decay at known, constant rates. Measuring the concentration of the products of radioactive decay (such as lead and argon) is the basis for calculating the age of rocks. In the examples of uranium-lead and potassium-argon dating, this age is most often the time since the rock itself formed. Knowing how long it has been since a rock formed is useful for learning about the history of the Earth, and to develop a self-consistent and absolute timeline of periods of time in Earth history. For example, the Jurassic spans approximately 200-145 million years ago, and the Cretaceous 145-65 million years ago. The science of measuring the age of rocks is called geochronology.

Thermochronology is a special branch of geochronology. Rather than measuring the age of a rock itself, in thermochronology the focus is on how much time has passed since a rock was at a specific temperature. This method works by measuring products of radioactive decay, such as helium, which are not completely preserved in rocks depending on their temperature. Because the temperature rises at greater depths in the Earth, this technique can also teach us about how long it has taken a rock sample to move from a specific depth to the surface. Thermochronology is being employed in this project to understand the history of New Guinea: when the island formed, and how quickly it has been rising. This in turn lets us understand for how long and how much of an impact New Guinea could have had on the climate.